Siberia is melting for Open Education

This year, Siberia has experienced unique progress. In Yakutsk, the capital of the Republic of Sakha (formerly called Yakutia) and the only city worldwide built on permafrost, the government was launching a hot season: The International Lensky Education Forum was heating the debate about open education. The forum in cooperation with UNESCO was organized for the first time and concluded one year of first innovative activities with a series of events. “We appreciate the strong support of the Yakutian government for open education fully conforming with UNESCO’s objective”, said Dr. David Atchoarena, UNESCO Director for Policies and Lifelong Learning Systems.

More than 3,000 participants attended more than 200 events during the four-day forum including the 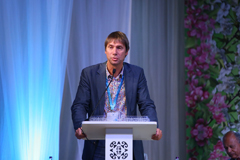 innovation market on the central Lenin Square of Yakutsk with more 100 booths presenting innovation projects from kindergartens and schools. “The dedication and strong support for Open Education by all Yakutian decision and policy makers up to the government are impressive and extraordinary”, emphasized Dr. Christian M. Stracke from the Open University of the Netherlands and one of the keynote speakers at the conference plenary. “Also in the meetings with the Vice-President and other ministers, I could feel their passion led by the Minister of Education Feodosia Gabysheva while she was attending the whole four-day forum.”

The Siberian melting for Open Education is taking place in Sakha and was demonstrated and proven by the other keynote speakers of the Lensky Education Forum that included the current President, the former President who is still the most popular politician in Sakha and the current Minister of Education. The key message was that Sakha, the biggest republic worldwide, needs innovative open education and schools. One of the reasons is its large size with less than one million habitants combined with nine months of winter with temperatures below minus 40 degrees.

The International Lensky Education Forum was not the end of one year of educational innovations but the starting point for a long-term change and orientation towards open methodologies in future education in the Republic of Sakha. Its title “Open School: Man – Institute of Education” symbolizes the focus on supporting all individual citizens to build by themselves their own personality facilitated in open schools. Open Education is also the programme for the next decade and it was announced that the forum will continue during the next years to demonstrate and showcase all the progress in opening up school education in Siberia. To achieve this sustainable goal, the government of Sakha and UNESCO have discussed and agreed on several follow-up activities with the focus on equity, inclusive and innovative education in open schools that will be supported by the leading initiatives ICORE and MOOQ as well as many other organizations for open education. It would be desirable if other regions and governments will follow this good practice to melt away for the bright future of opening-up education by innovative methodologies in favour of the whole society.

You can find my keynote on slideshare with open licence here.